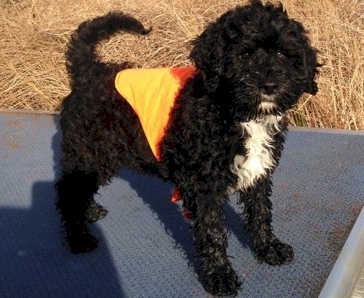 It began with Bridonport's Designated Diver "Tiago". I acquired him at 5 months ... Read More 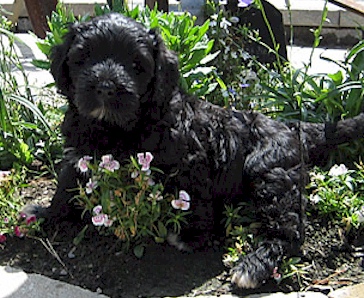 My biggest priority in breeding is for temperament. I want families to have loyal ... Read More 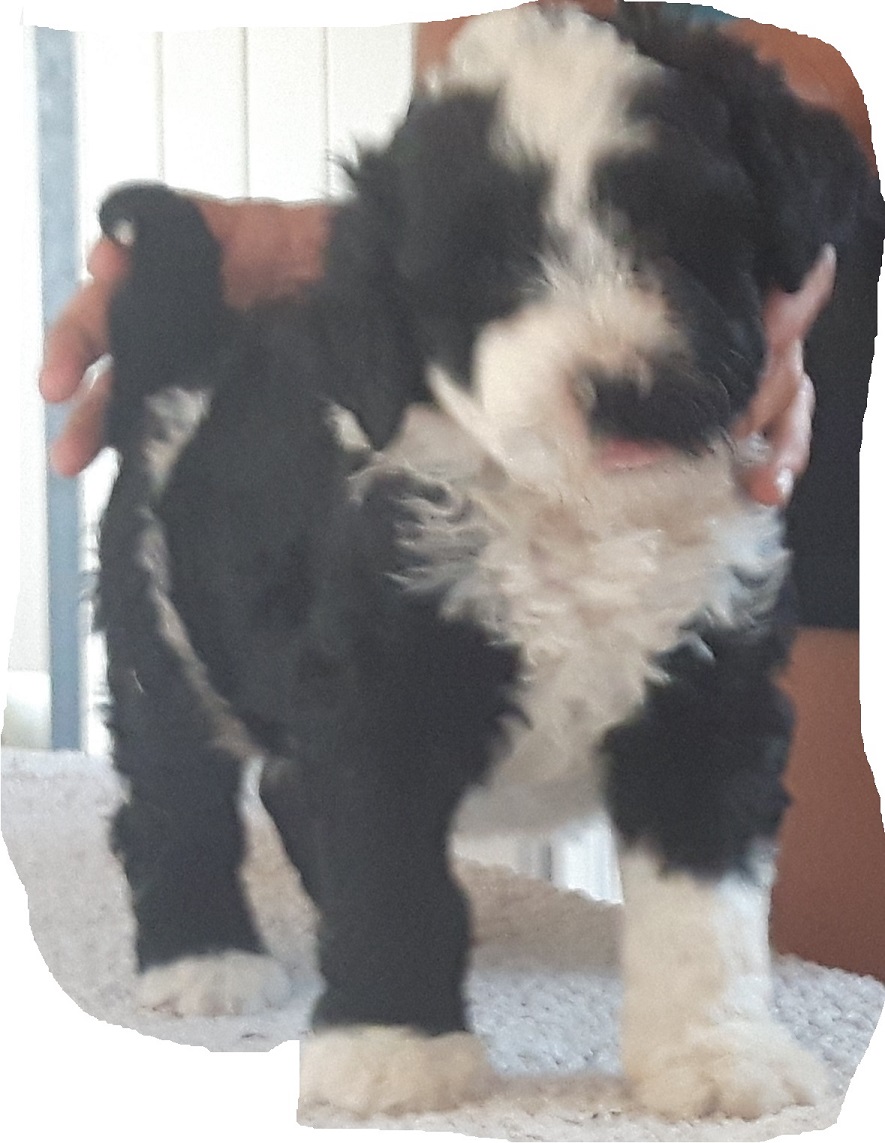 At 7 weeks, the puppies are individually temperament tested and then each ... Read More 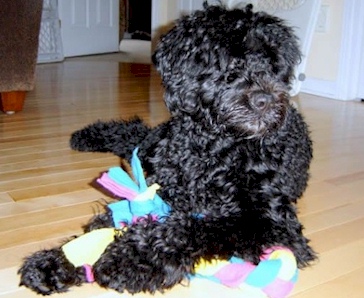 After falling in love with my own first two Portuguese Water Dogs, and ... Read More

For General PWD facts go to our FAQ's page. 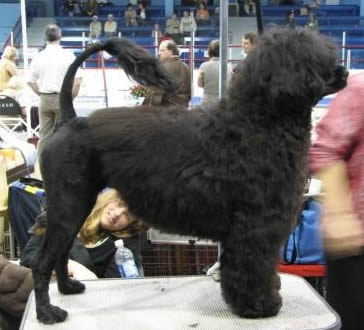 As a breed, they are very intelligent, sensitive, willful, athletic, loyal, energetic but not hyper. They can quickly out think their owner, so a training class with a knowledgable instructor is a must for a young PWD. Dogs are master manipulators so when people get a breed with above average intelligence - staying ahead of them with consistent rules and structure is very important.

They are sensitive. Because they are intelligent, they think A LOT! and injustice done to them may be taken seriously by a PWD. While they can be willful and test the limits of the rules, if they feel that they are being unfairly treated they can become quite upset and may bark, climb, paw, lie down in a fit of anxiousness. You can be (and will need to be with an adolescent PWD) quite firm and make sure that the rules are enforced but otherwise, a very young or mature PWD doesn't need harsh training. Make it make sense to the dog and the dog will typically comply.

They can be willful for sure! Especially before 14 months of age. The puppy PWD is rambunctious, teething, ready for learning! They need exercise and training classes. As a Working dog, they are not innately 'friends with everyone'. They are loving with their family and cautious and suspicious with outsiders. So, proper socializing in a group class with other people and dogs should be mandatory for every PWD. They need positive relationships and experiences with their world. Obedience classes will help to keep the commands and structure that PWD's need in their first year. They will attempt to get their way and do as they please (most dogs do!) but a PWD may try harder and come up with more manipulative strategies than some other breeds! So having a competent trainer to consult with each week is invaluable for the owner of an adolescent PWD (between 6 months and 14 months).

They are very athletic. They can run, fetch, bike, hike, swim, jump, crawl, climb! If it gets them praise, recognition, approval or anything else that they might want - they will do it! And they have energy that does, most certainly need to be used but that doesn't mean they are hyper. Once they are mentally and physically exercised, they will settle quite nicely in the house. Not demanding for more, more, more once the family is quiet. As pups they may continue to play a bit in the house but as they mature, that will usually subside and the PWD will be content to rest near their owners feet! 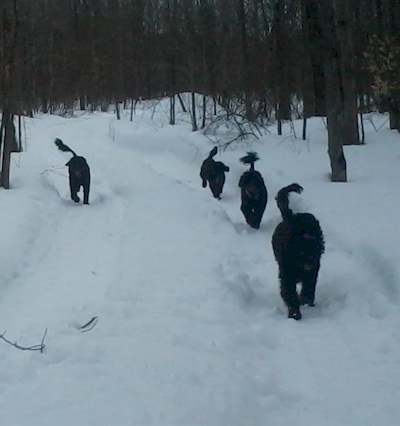 The Portuguese Water Dog is in the Working Group with the Canadian Kennel Club. http://www.ckc.ca/en/Choosing-a-Dog/Choosing-a-Breed/Working-Dogs

These breeds have a job to do. Some pull sleds or carts while others guard livestock, homes, businesses or military installations. Diverse duties may also include water-rescue work, alpine rescue or stints at sea as the fisherman’s helper.

Size varies from litter to litter. Of course we have our standard and attempt to stay as close to it as possible but there is a significant size difference depending on genetics.

Some are quite small. My Grace for instance, was very petit! She was 18 3/4". A little shorty! Meanwhile, she produced a son, George who is 23"! Each family may be after something a little different so you can have a PWD that is smaller (on the small to medium size scale) to a larger dog. George is quite the DOG. He takes up space on the couch / bed and needs a crate that's a larger size. Dizzy is quite petit too. And she came from a Mother and Father that are moderately sized.

The energy level of most Working breeds depends on the task at hand. Guardian dogs may patrol or simply observe until called upon to defend. Then they surge into action. Sled dogs keep their enthusiasm in check until they’re in harness and then they’re keen to hit the trail. Working breeds might be termed energy efficient.

The Working breeds vary from medium-sized, such as the Standard Schnauzer, up to giant, typified by the Great Dane, Mastiff or lesser-known Leonberger.

Prized for their long association with humans, their loyalty and willingness to work, these breeds usually take well to training, though some may take longer than others for lessons to sink in. PWD's are extremely trainable. They are intelligent and athletic. They can however, be wilful. You will need to assert leadership as well as give incentive for your PWD to excel at Working. As a pet, they are 'easy' after about 14 months old. The basics are easy for them to learn and will retain those commands for life if given a little consistency. If you wish your PWD to be an obedience, Water Work, agility, Rally, etc competitor, you will need to set them up for successful learning, be consistent - know what you expect, give incentive (treats / play / praise) and be on YOUR game to teach your PWD. Because are willing and eager to learn. They can learn quite complex behaviour patterns / sequences. But it starts with respect of the owner and then good communication skills (understanding each other) and incentive to keep going, even when the going gets tough.

They don’t wear grey pinstriped suits on the job but they are serious about their work.

They can be quite goofy to quite serious. Tiago is quite a serious PWD. He can certainly play and get goofy but he is more work oriented. Grace and Cherry are much softer and would far rather cuddle than doing anything that involves the slightest bit of pressure. Dizzy and Alma are much goofier. They play and wiggle and want to have fun. They can take some pressure and need some firmness every so often but pretty easy going and fun loving. They are similar in so many ways: Their gaze - they all look right at you and seem to understand you, they are all athletic and tear through the woods, into water, up over logs, etc. They are all loyal. They don't run away and can be loose without much worry (Alma is a bit more independent and curious but she's never gone for long!). Yet, they are all still individuals with their own quirks and character.

They all like to jump up, they can all bark to be demanding. They will all occasionally 'surf the counter' if they think they can get away with it. They all bark when someone arrives and they all love to play with toys. They love treats and the cool weather. If it's hot out, they want air conditioning or a watering hole.

All my dogs are still crate trained and all PWD's SHOULD be until they are done teething. A young PWD can chew through a pile of furniture in a short length of time. They have VERY STRONG mouths, originally used for retrieving large, wet gear from the water. They need structure and supervision the first year so crate training is essential for the safe, security and well being of the PWD as well as for the sanity of the owner!

They are affectionate, regal, easily trained, non-shedding, nice sized dogs. They are versatile and have a range of character throughout the breed that gives owners a chance to find their best match! There are as many unique individuals as there are coat type, color and markings!

For centuries, this seafaring breed existed everywhere along the coast of Portugal and is considered a purely Portuguese breed. Owing to modifications in the fishing systems used, the breed has become restricted to the province of Algarve which should be considered it's home. It was prized by fishermen for its spirited yet obedient nature and a robust, medium build that allowed for a full day's work in and out of the water. The Portuguese Water Dog is an athletic swimmer and diver of exceptional ability and stamina. He aided his master at sea by retrieving gear and broken nets, herding schools of fish and carrying messages between boats and to shore. He is a loyal companion and an alert guard.

The Portuguese Water Dog is defined by his job. He has a hard, penetrating and attentive expression, splendid sight and a fair nose. Slightly longer than tall, he is a medium sized, sturdy, athletic, swimming dog with webbed feet, short neck and a wavy or curly coat to protect him from the elements, whether in the water or on land. From his impressive head with piercing gaze through a rugged body to his powerful tail carried up in a ring with its characteristic flowing flag, he presents an indelible impression of strength, spirit and soundness.

An animal of spirited disposition, he is self-willed, brave and very resistant to fatigue. Exceptionally intelligent and a loyal companion, he does his job with facility and obvious pleasure.

There are two varieties of coat

Any deviation from the described ideal is a fault. Major Faults are those deviations that interfere with the performance of the dog's traditional job and which therefore cannot be overlooked.

Health concerns in Portuguese Water Dogs are the following:

Information on these health concerns can be found at:

For more information on the breed,